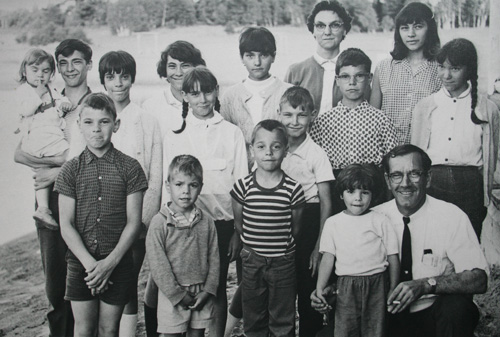 Bonbons Richard was founded in 1956 by Nestor Richard - a father of fourteen children, who decided to produce sweets at home to supplement his income as an industrial draftsman.

“Production” began in a small apartment in Trois-Rivières, where the idea to make candy was born. In 1966, the family moved to Cap-de-la-Madeleine and the candy making “lines” were set up in the basement. Treats were produced for about six months of the year (September to May). Hot weather did not make for the best quality control.

As well, the process could be hazardous. Sugar was boiled over gas burners and mixtures were poured into molds by hand. The cooled candy was then packed by hand and wrappers were sealed with a steam iron. The family worked together and enjoyed the fruits of their labours. Little did they know that the Richard name would become synonymous with sweets.

Early retailing took place in public markets in Trois-Rivières and local merchants soon began stocking Richard products. By 1977, family members were heading out on their own paths and the Richards put their cauldrons in storage. Little did they know that the business would be revived one day.